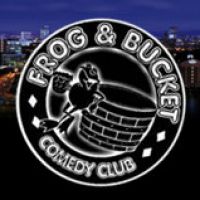 Beat the Frog at Frog And Bucket Comedy Club

This event has already happened!
This event occurred in October 2020. If you're looking for a upcoming event, try the links below:
View more events.
Tweet

Lineup and Details for Beat the Frog

Up to 10 acts take to the stage and try to do 5 minutes of material without being carded off stage.The most unpredictable comedy night in the north!

The Frog’s open mic night has helped launch: Peter Kay, Johnny Vegas, John Bishop, Jason Manford, Sarah Millican and the list goes on. At the start of the competition 3 cards are handed out to lucky members of the audience. Up to 10 acts then take to the stage and each try to do 5 minutes of material. If within the 5 minutes all 3 cards go up then the act has lost and must leave the stage. If the 3 cards stay down, that act has successfully ‘Beat The Frog’. They are then invited back to the stage for a clap off at the end of the night which will determine the overall winner. This is the most unpredictable comedy night in the north. The show where YOU are in control and you never know which future stars you will see!